Manufacturer and supplier of dates | parsmive

Sayer Dates aka Sair or how locals call it Esta’amaran dates are Semi dry, soft  Fleshy and curing smooth .this product has good caramel like flavor  with  little rag ,they are ripening midseason around  late September . 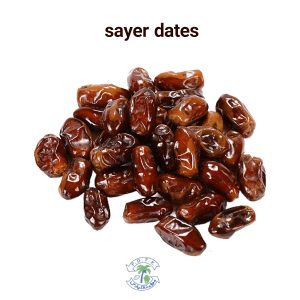 Color: this product in Rotab Stage Are Amber color and become  reddish brown with moderate bloom when become fully-grown.

Around  100,000 tons of the Sayer dates are harvested annually from 20000 hectares of palm lands   in Khuzestan province which land’s attitude are   between 100 meter to 500 meter.

this product is high demand for industrial usage and widely exported to USA Canada, Australia and UK largely in form of pitted Sayer Dates, although most of usage for Sayerdates are pitted dates but in recent years un-pitted Sayer dates has found its marketplace mostly in Russia and India.

The moisture of ripped this product is between 11% to 16% which depends on climate factors such as Temperature, rain, humidity, light and wind from Month of MAY to late AUGUST. Target moisture for exporting goods is between 11%-13%

Pitted Sayer dates is graded in 5: mainly based on size of the fruits:

A.Q pitted Sayerdates which has less than 110 pcs per LB

A.Q pitted Sayer dates which are free in size

Industrial pitted Sayer dates which includes the dates which has physical damages as per Standard specifications.

UN-Pitted Sayer dates graded in 3: mainly based on size of the fruits:

A.Q unpitted Sayer dates which has less than 100 pcs per LB

Harvesting period: September – October, the farmers clime the palm and cut the bunches, at the end of the day The Dates are moved to factories near palm lands and the dates are immediately fumigated with Methyl bromide gas either in Vacuum chamber or under nylon.

this product are very resistance and can be kept in room temperate for more than 12 months (subject to periodically fumigation). They can be shipped in dry container or trucks, that why they are cheap in maintenance. High sugar content make them suitable for Food industry such as Cereal Factories, confectionaries, Bakeries, condiments and snack producers.

The storage condition: keeping the dates in climate control storage with 5C can prolong the shelf life of the goods to more than 24 months.

Shipping Condition: Dry container or trucks can ship the cartons of dates palletized or non-palletized.

Chopped Dates is one of the bi product of Sayer dates, both Dextrose or rice flour coated. The size depends on Customer order usually 3/8” X3/8” X3/8”. As the fruit is semi-dry its chopped dates are non-sticky with smooth texture which is one of the most favorable chopped dates in the market. beside this it is high resistance to being sour or infested.

Date paste of Sayer with good odor and amber color it is high demand in confectionaries.